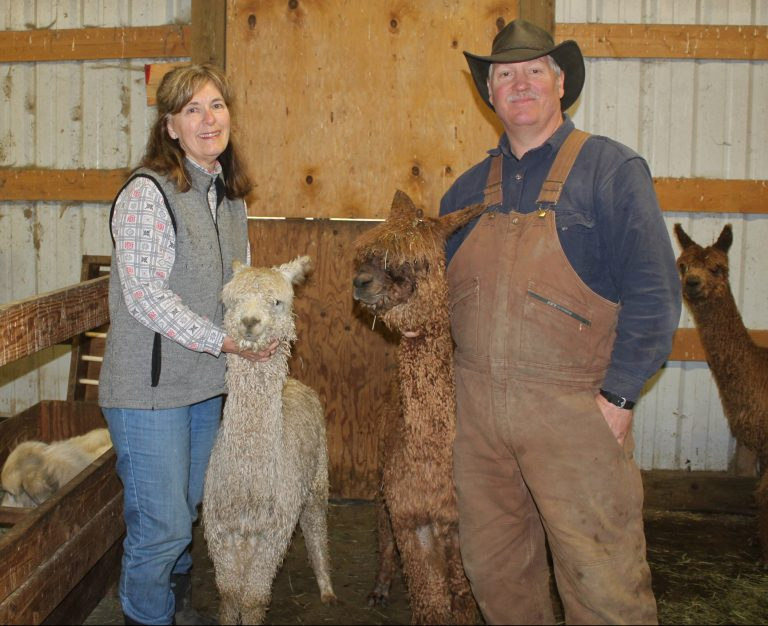 Barbara and Randy Coleman were at a 25th class reunion when they started talking to a couple who owned an alpaca farm. Their first thoughts were: “What’s an alpaca?” Their curiosity turned into a visit to their friend’s farm, which is where they fell in love with the animal that “just draws you in,” according to Randy. Neither Randy or Barbara were accustomed to farm life previously and thought this may be a new outlet for them.

Fast forward 17 years and 100 alpacas later, and you have Wings & A Prayer Alpacas located on highway 99 in Amity. Randy explains the inspiration behind the name.

He says: “Wings was the name of our first alpaca we bought, and we thought, well, we will have Wings, and with a prayer, this might work out.”

The next years consisted of research from their friends, the internet, books and educational meetings with the Colombia Alpaca Breeding Association about raising and caring for alpacas. The Colemans now raise, sell and process the fiber of alpacas as well as sell and compost their remains to other local farms. They make yarn, clothing, decorative accessories, build feeders and shelters and sometimes sell the lean meat off of some of their animals to other farmers.

“We like alpacas because they are an easy animal to raise. They don’t challenge fences, they average 150 to 200 pounds and they are timid, you wait for them to approach you,” says Barbara.

When asked the most rewarding part of owning an alpaca farm, both Barbara and Randy answer simultaneously, “We do it for the baby alpacas. It is so fun to watch them grow,” they say.

The Colemans say that the community is very supportive of their business and cite local shops that carry some of their products.

“This community is unlike any other we have ever lived in. When we were in Canby, for example, we never felt involved or included. But McMinnville welcomed us with open arms and the residents here support small businesses,” says Barbara.

The Colemans say that even though their farm is in Amity, they still feel included in many of the events McMinnville hosts throughout the year. “

We are involved with the Thursday market and also support the sock brigade, an organization that donates alpaca socks to the troops.” says Randy. The Colemans explain that the special part of being involved is the networking opportunities.

“More growth in McMinnville is good. We enjoy meeting new people and other business owners because it opens doors for us and our business,” says Randy. Wings & A Prayer wants the community to know that they are open even when the sign isn’t lit.

“If you come to our shop and we are home, we’re open. We’re almost always at the farm and anyone can stop by” says Barbara.

Wings & A Prayer encourages people to stop by the farm to browse the shop, visit the alpacas or learn more about the lifestyle they offer.