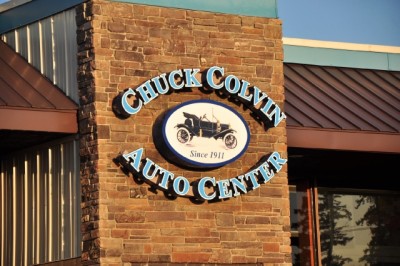 In 1908 Ford Motor Company announced the first Ford made by Henry Ford, The Ford Model T. A few years later Gilbert Tilbury opened the Ford Motor Dealership in McMinnville Oregon. Mr. Tilbury owned and operated The Ford Company from 1911 to 1949 making a difference in the auto industry and his local community.

Chuck Colvin who had been working at Tilbury Ford, worked for Tilbury in 1949 and eventually bought the company in 1955. He was the owner of the company from 1955 to 1983 when his son, Mike Colvin bought over the company.

Mike Colvin owned and operated Chuck Colvin Auto from 1983 until 2012. In 2004 Gary Edwards (the current owner) started purchasing stock from Mike Colvin. The stock purchase was completed in 2014 and Gary Edwards took over the Business. Gary joined the dealership in 1987 right out of High School, and worked in several positions throughout the dealership. Growing up in the Colvin Family Gary is committed to making sure Chuck Colvin continues to do business with all the same discipline, honesty and integrity as it has since the beginning.

Chuck Colvin Ford through the years and with some changes has always remained a locally-family owned Auto Center. The commitment to their employees and customers have been just as strong as when it all started in 1911.

Being Oregon’s oldest Ford dealership, it is impressive to see the consistency remain the same with the change of locations and change of ownership. It has always had the same mission and vision in mind.

Big Enough to Serve You, Small Enough To Care

Chuck Colvin Auto offers a variety of new and used cars, parts, service, and financing. They are a full-service dealership, ready to serve the community the best way they can.

Contributing to This Good Place

As a large supporter of the Non-Profits and the community of McMinnville,

Chuck Colvin is thankful they are able to support the local city events and activities. Being a part of a community that is connected, involved and thriving is a good place to be.

The McMinnville Chamber of Commerce is proud to have Chuck Colvin Auto as one of their oldest Chamber Members.

The Chamber is a huge part of the success and resources in the community. If it wasn’t for them, our community wouldn’t be the place it is today.