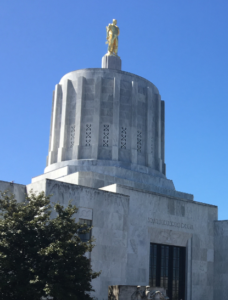 On Monday, February 3, 2020, the Oregon Legislative Assembly reconvened in Salem for a 35-Day “short” legislative session. Established by the passage of Ballot Measure 71 in 2010, short sessions were enacted when 68 percent of Oregon voters voted “Yes” on a constitutional amendment referred to voters by the Legislature with the passage of SJR 41.

The legislature and the voters both intended for the new 160-day sessions to maintain the primary goals of the previous biennial sessions: adopting a two-year budget and addressing large, substantive policy issues. The 35-day short sessions were to be reserved for tweaking recently passed legislation as needed and to make minor adjustments to the adopted budget.

A couple things to keep in mind when thinking about the short session:

The schedule is intense and difficult for lawmakers and the public to keep up with. In long sessions, legislative committees have about three months to consider the implications of major policy bills and appropriately amend them in committee based on feedback from concerned voters, lobbyists, and fellow legislators. During a short session, committees have fewer than two weeks to “work” (i.e. vote) bills out of their first Chamber (House or Senate) and send them over to the other Chamber. Specifically, if a bill is not officially scheduled for a Work Session by just four days after a session begins and voted out of its House or Senate committee by just five days later, it is dead for the session. In order to survive this initial chaotic period, bills must be favorable to those who control the schedule: the majority party leadership.

Another attribute of short sessions is disagreement around whether a bill fits within the intentions of Ballot Measure 71. Historically, opponents of bills perceived to be overly expansive or controversial have decried the rushed and tightly controlled process while proponents have tended to maintain that a given bill is imperative, and that the more complicated policy analysis was done in the preceding long session. For these advocates or lawmakers, a bill is being brought forward during the short session precisely because the hard work of debating and amending it has already been completed.

Arguments along these lines could be heard from lawmakers on both sides of the aisle throughout the first week of committee hearings and floor sessions. As controversial measures regarding greenhouse gas emissions (SB 1530), unemployment benefits for striking employees (HB 4007), the corporate activity tax (HB 4009), and the elimination of the federal Opportunity Zone tax incentive in Oregon (HB 4010) were debated in committee, both Democrats and Republicans were clearly strained by both the contentious topics and the rapid pace of their schedules.

In order to assess the potential impact of these bills and others to Chamber members, the Chamber’s Government Affairs Council (GAC) met on Thursday, January 30 to discuss specific policy issues as well as the big picture of the short session. Chamber staff were present for hearings on these issues throughout the first two days of the session in order to observe your state government in action and to support the efforts of fellow business advocates with the Oregon State Chamber of Commerce (OSCC), the National Federation of Independent Businesses (NFIB – Oregon), the Oregon Economic Development Association (OEDA), and Oregon Business & Industry (OBI) as they worked to maintain a favorable climate for business creation, innovation, and retention in our state. Please visit the preceding pages to learn more about the legislative priorities of each of these established business advocacy organizations.

Friday February 7 was the first major deadline of the session. Any bill not scheduled for further consideration by Friday can be considered dead. However, only about 20 of the 250 bills that were introduced fell victim to that cutoff, due in part to the numerous bills that were officially assigned to committees that are not subject to the deadlines: the House Committee on Revenue, the Senate Committee on Finance and Revenue, the House and Senate Committees on Rules, and all Joint Committees. As the session progresses towards its March 8 constitutional deadline for adjournment, Chamber staff will work to provide regular updates to members regarding legislation that may affect them. Please see below for a selection of bills staff have been monitoring, including their current status.

Current Status and Path: Expected to pass the Senate Committee on Environment & Natural Resources at its Tuesday, Feb. 11 Work Session. The bill will then go to the Joint Committee on Ways & Means, where both its fiscal (i.e. cost to the state) and revenue-raising implications will be debated further. Should it pass out of Ways & Means without amendments, it would go to the Senate Floor for a full vote before being sent over to the House. Overall, this bill’s future remains uncertain as Senate Republicans have indicated they may leave the Capitol to prevent its passage, and a few Senate Democrats have stated they are hesitant to let the session dissolve over this policy.

Current Status: This bill would make permanent the 1.8% statewide lodging tax rate passed in 2016. Under current law, the rate is scheduled to be reduced to 1.5% on July 1, 2020, which was projected to lower total TLT collection by about $6.8 million per year. By passing HB 4047, the 1.8% rate would be made permanent and would help ensure the important work of Travel Oregon, as well as the work of Destination Marketing Organizations like Visit McMinnville, continues to maintain the competitiveness of the state and our local communities as attractive tourist destinations. Many Oregon communities are reliant on visitor spending and the State’s partnership in tourism marketing efforts benefits local economies. This bill does not affect local transient lodging taxes.

Current Status: Scheduled for a Work Session on Wednesday, Feb. 12 to amend and move out of the House Committee on Business & Labor. This bill would direct civil penalty reserve funds (about $100,000/year) to finance technical assistance for employers in Eastern Oregon as well as fund the free online publication of BOLI technical assistance and compliance documents. Initially, there were concerns among business advocates that the language of the bill would create a perverse incentive within BOLI that might have led to sharp increases in civil penalties on well-intentioned and compliant employers. This was negotiated with BOLI and the concern has been abated, pending the likely adoption of this amendment.

Current Status: Awaiting a work session in House Revenue Committee, possible further public hearing on amendments. This bill would disconnect Oregon from a provision of the 2017 federal tax law that created Opportunity Zones. The first public hearing on this bill saw significant turnout from both proponents of the bill and proponents of Opportunity Zones themselves. Written testimony both in support of and in opposition to this bill can be viewed here.

Current Status: Scheduled for a Possible Work Session today, February 10 to be voted out of the House Human Services and Housing Committee and sent to the Joint Ways & Means Committee. This bill would significantly increase state funding for Children’s Advocacy Centers, including Henderson House and Juliette’s House here in McMinnville, by establishing a new Child Abuse Assessment Account within the State Treasury. Eligible CACs will be allocated funds based on the size of each center’s service area and the costs of equitably providing services to all victims within that area. Many CACs provide economic and livability benefits to the communities they serve through highly specialized training services. This training is provided to both businesses and individuals and equips community members with the knowledge and confidence to detect and report suspected instances of child abuse and domestic violence.