“The Garden Spot of the Willamette Valley”

“The Garden Spot of the Willamette Valley” 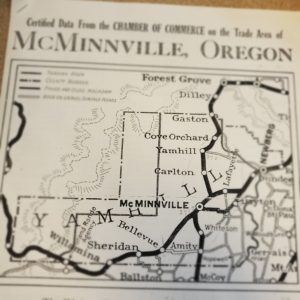 While going through some old files in the Chamber office, I found a report from the early 1930’s, containing some interesting statistics and information about McMinnville and Yamhill County.

Here are some highlights of the report:

Local shopping days are Wednesdays and Saturdays, with most sales happening at the first of the month and peak retail season is in the fall, after harvest.

The Chamber had 212 members and met every Monday. Kiwanis had a membership of 35 and met on Wednesdays, and Rotary with a membership of 44 met every Friday. The Legion had 290 members, Odd Fellows 275 and the Elks 1000 members. There were 9 churches of various denominations. Two theatres with a total capacity of 900 and the armory had a capacity of 2,500.

The Southern Pacific Railway line from Portland to Eugene and three lines of the Oregon Stages, Inc. with a total of 52 stages daily, served the area.

The Wholesale and Retail portion of the report mentioned there were 136 retail stores in McMinnville including:

Agriculture statistics included wheat yields ranging from 55-72 bushels per acre in 1929. World recognized poultry, cherries, prunes and pears were common crops grown in the area. Potatoes had yields of 150 to 350 bushels per acre. Yamhill County led in the production of the Oregon Walnut, with a market of .22-35 cents per pound. Some of the ten-year-old trees were known to produce over 100 pounds of nuts per season. Filberts (aka Hazelnuts), a larger and sweeter version than those imported from Italy, were in great demand.

The report notes the community has “cheap” electrical power (thank you MWL). Water was supplied from a 112,000,000-gallon reservoir, stating that the water supply “is 100 per cent pure, containing no chemical purifier and noted for its quality”. Natural gas was not available in McMinnville at the time.

McMinnville had 1,166 families and 1,308 passenger automobiles, or roughly more than one car per family.

Land was reasonably priced at $25-50 per acre for hill and foothill land. High grade valley land was $75-150 per acre.

The report ended the with the following words of advise “If you would live where there are no cyclones, tornadoes and blustering winds, where lightning and thunderstorms are unknown; where ocean beaches and forest beauty is a short drive away; where wintery blasts are never felt; where vegetation is green the year around and where living is worth while, then come to the heart of the Willamette valley and to McMinnville.”

The information in this blog post came from a report printed by the Telephone Register Publishing Company, McMinnville (now the News-Register) and researched by Earl Bunting and Associates Marketing Counsellors, from Portland Oregon for the McMinnville Chamber of Commerce, early 1930’s. Information collected, was as printed.