McMinnville automotive detailer Chris Lee of McMinnville Auto Detail has been hand-picked for the much-anticipated 2021 Air Force One Detailing Team at Seattle’s Museum of Flight, July 11-18. After two years, and thanks to a generous benefactor, Master automotive and aircraft detailer Renny Doyle of Detailing Success will return to the Museum of Flight this year with a smaller but more streamlined Air Force One Detailing Team to continue the preservation of the first presidential jet Air Force One on display at the museum. Also on the agenda is the equally historic WWII B-29 Super Fortress Bomber.

This will be the 18th year Doyle, known as “The Detailer of Air Force One”, will lead a team to Seattle to continue their role as caretakers of the famous presidential plane and the notable B29 Bomber. While the team is less than half the size of teams in recent years, this year’s slimmed down team of 20 will consist of the most experienced and proven members of the team who could make the last-minute commitment.

Doyle chooses his team members carefully every spring from detailers he has certified over the years. Many of them are senior members of the team that go back to the original restoration project in 2003, while he tries to also bring in rookies every year who show promise in the meticulous art of paint correction and polishing one-stage paint and brightwork.

Lee and other team members are successful detailing business owners who pay their own way to Seattle and donate their time and skills to the project.

“When I got into detailing, I never dreamed I would get the opportunity to work on such a prestigious project as Air Force One,” said Lee. “I am honored to have been chosen for this project, and a chance to preserve a piece of American aviation history.”

The famed detailers will tackle only two of the more than 15 historic aircraft the team has been restoring and preserving over the past decade; however, Doyle said he is grateful for the opportunity to be working on the two celebrated airplanes after having to skip last year due to the coronavirus pandemic.

“In the early days of restoring Air Force One, we had a very small but elite team of detailers that only came every couple of years to clean it,” said Doyle. “The plane was still out on the tarmac and in that two-year period, it was almost like having to start all over every year.

Today the plane is on display inside the open-air Aviation Pavilion, but it is still exposed to moisture and Seattle’s cold winter weather conditions. Doyle said every year when they come to work on it, the paint has begun to show signs of weathering and the brightwork has begun to dull, even though they use a 1-year protective coating to tie it over until the next year.

“I have chosen Chris for the 2021 team because of his experience and commitment to the art of detailing,” said Doyle. “These are priceless vintage aircraft and there is no room for mistakes. I trust him and his eye for perfection and look forward the having him on the team this year.”

It has been two years since they have laid hands on the two aircraft and the coating will have worn off by now. Doyle said they expect to see some weathering of the paint and oxidizing of the aluminum.

This goes double for the B-29 Bomber with its 100 percent aluminum fuselage.

For more information about Chris Lee being chosen for the 2021 Air Force One Detailing Team at Seattle’s Museum of Flight, contact him at (503) 437-4059, or PR representative Kimberly Ballard at (256) 653-4003. Learn more about McMinnville Auto Detail. 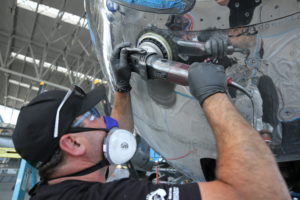 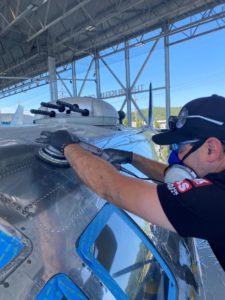 About Air Force One

The first presidential jet plane (Air Force One) known as SAM (Special Air Missions) 970 was a flying Oval Office for four U.S. Presidents including Eisenhower, Kennedy, Johnson, and Nixon. The Boeing 707-120 also entertained many international VIPs such as Nikita Khrushchev and Henry Kissinger. For more than a decade, it lived on the open tarmac at Seattle’s Museum of Flight, exposed to Seattle’s notorious climate.

Known as T-Square 54, the 1950s B29 Superfortress Bomber is still scarred with holes where fifty-caliber bullets struck her aluminum skin while flying sorties over the Pacific and Japan during WWII. It was rescued by the Museum of Flight after abandonment in an Arizona desert. The Air Force One Detailing Team brought the war-torn aircraft back to its original shining glory.