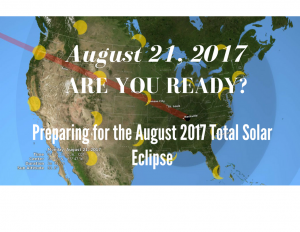 On Monday, Aug. 21, 2017, a total eclipse will cross the entire country, coast-to-coast, for the first time since 1918. Weather permitting, the entire continent will have the opportunity to view an eclipse as the moon passes in front of the sun, casting a shadow on Earth’s surface. And plans for this once-in-a-lifetime eclipse are underway – scientists are submitting research proposals, NASA is sharing information on safe eclipse viewing with community centers, and citizen science projects are developing.

The total solar eclipse begins near Lincoln City, Oregon, at 10:15 a.m. PDT (1:15 p.m. EDT). Totality ends at 2:48 p.m. EDT near Charleston, South Carolina. The partial eclipse will start earlier and end later, but the total eclipse itself will take about one hour and 40 minutes to cross the country. NASA will fund a host of science projects that will occur during this unique period of time.

Some fun facts and things to think about….

– On Monday, August 21 the sky will start darkening around 9am and will be completely dark for a total of about 2 minutes at 10:21am.  The sky will have some level of darkness until around 11:45am.

– Experts expect 1-2 million people to be traveling within the path of totality between the Oregon Coast and Madras.

– The State Fire Marshall and State Police, working together with the counties, will have ready-response stations at strategic traffic points along the path of totality and major routes.  They plan to have more dispatchers and medics on staff that weekend, and will be placing signage and trailers to help move traffic.  They are even converting maintenance crews to incident response crews that weekend.  They will have CERT teams on alert and backup radio teams as well.

– They expect cell towers in the area to be overloaded.  Polk and Marion counties are working with Verizon to bring in supplementary towers.

– They encouraged all cities to be ready with plans for extra waste management.

– They encouraged all businesses to plan well in advance and be overstocked on things like water, beer, and ice.  Restaurants should plan their food deliveries well in advance so roads are as free as possible from delivery trucks.

– Pharmacies should plan ahead to have extra life-saving drugs on hand (epi-pens, etc.).

– City health officials need to warn citizens about the harm of not wearing special viewing glasses during the eclipse.

– Any events that businesses owners are throwing need to have an exit plan or plans to keep viewers at their location after the event to eliminate high levels of traffic on the road after the event.

– Rentals for that weekend are in VERY short supply.  Portapotties, potable water trucks, generators, and other rentals are completely sold out in most western states.